Upgrades to business class are what’s colloquially associated with miles and points. The fact of the matter is that upgrades are rarely a good use of your points as they often come with strings attached. Generally an upgrade using points requires you to book an economy class ticket in the higher fare buckets, meaning that the cheapest economy tickets can’t be upgraded. Moreover, the number of points to upgrade are often the same or in some cases even more than the cost of booking an award ticket in business class. Lastly upgrade inventory is the same as award inventory, meaning that there have to be award seats in the higher cabin in order for your upgrade to confirm.

In short upgrades is something we rarely advocate, though there are some exceptions to this rule. Enter: British Airways Executive Club.

British Airways Executive Club (BAEC in short) is the frequent flyer program of British Airways, a member of Oneworld, and a transfer partner of Amex, Chase and Capital One. British Airways is a great airline partner for traveling between the United States and Europe, mainly thanks to their vast route network and superior award availability in business and first class compared to its Oneworld counterparts Iberia, Finnair and American.

For award redemptions British Airways Executive Club isn’t known to be the best program. This boils down to the fact that they price award tickets on a per-segment basis meaning that the more flights your itinerary contains the more expensive it will be. Secondly, British Airways imposes peak and off-peak pricing meaning that you can expect to pay a higher cost in Avios if you chose to fly on a weekend or holiday season. Third and lastly for first and business class itineraries originating in the United States you can expect to pay a hefty sum for the taxes and fuel surcharges, upwards of 1500-2000 USD per person in addition to the points.

Simply put British Airways Executive Club is a bad program for award redemptions in first and business class due to their high points prices and hefty fuel surcharges.

Upgrades on British Airways Executive Club come with a few strings attached, these are as follows:

How to maximize the value of British Airways Avios upgrades?

When it comes to maximizing the value of British Airways upgrades it’s important to factor in the cost of the underlying ticket. Business Class tickets originating from the US are known to be very expensive compared to other markets, though in some cases you may be able to find discounted tickets.

The best value however, is for upgrading premium economy tickets to business class.

First of we’ll need to find a reasonably priced premium economy class ticket, and as all fare classes in premium economy can be upgraded we easily start with looking up available options on Google Flights. During the fall of 2021 and well into 2022 it’s possible to find premium economy to many European destinations for around 1200-1300 USD per person. We would consider this to be a great deal when compared to economy which usually costs roughly 600-800 USD per person.

Once we’ve found our flights it’s time to check for the upgrade availability. This can be done by making an award search on the British Airways Executive Club website which also offers you the option to search on a monthly calendar.

When upgrading to a higher cabin any additional airport taxes will be paid, differences in fuel surcharges or airline fees are not collected. Upgrades from premium economy to business cannot be made online so once your flights are booked and points are transferred you can process the upgrade by calling the British Airways Executive Club hotline.

In conclusion upgrades using British Airways Avios are a great way to travel in business class for a relatively small amount of points, especially when you consider the fact that a paid ticket in premium economy will still come out cheaper than the taxes and fuel surcharges that you’d otherwise pay on an award ticket. If you’re short on points or a family of four traveling it’s certainly a great use of your points. 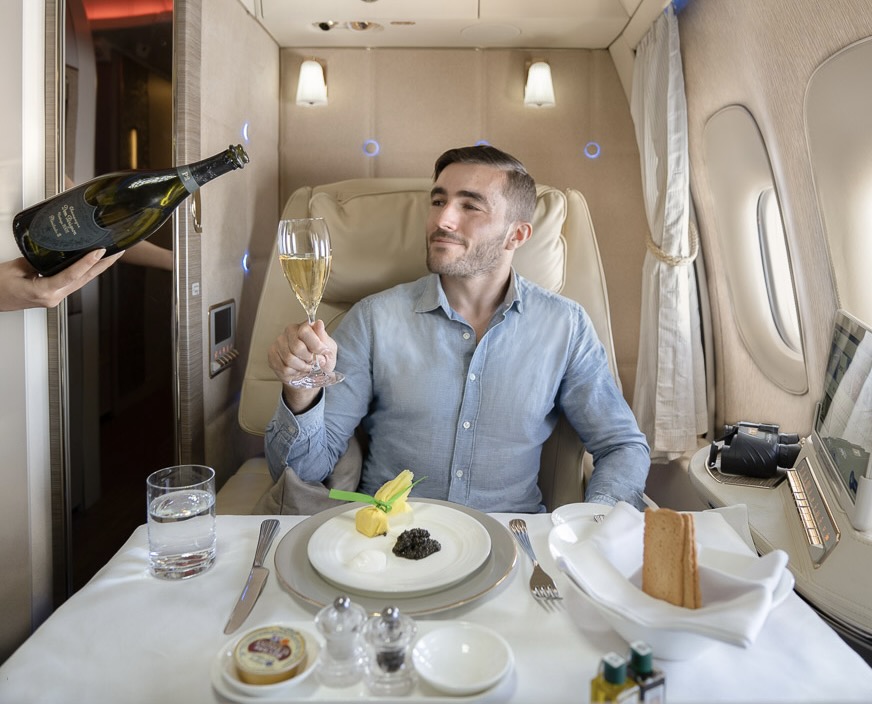